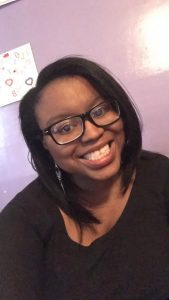 When she started the hashtag #DisabledAndCute, Keah Brown wasn’t thinking she’d start a movement. She woke up one day, and as she says, “I looked in the mirror and said something kind about myself.” She decided that she’d make a conscious effort to say something kind about herself every day, and when she finally got to a point where she began to believe it, she started the hashtag.

The hashtag, which was quickly embraced by the disability community and covered in a number of major media outlets, was a part of Keah’s larger activism efforts: “To shine a light on what it’s like to be a disabled woman of color.” Her work mainly focuses on portrayals of disability and people of color—and the intersections between those experiences—in the media. Keah has published in Harper’s Bazaar, Teen Vogue, Lenny Letter, ESPNW and more.

“So often, disability is represented as so white. Even in indie films, you don’t see disabled people of color,” says Keah. “We shouldn’t be silenced in the way that we have been. My goal is to make mainstream media less white and able-bodied.”

According to Keah, the response to her work has been mainly positive. She recently met writer Roxane Gay at a University of Buffalo event, and Gay knew who she was. “Knowing that she’s read my work is so cool,” Keah says. “I think it’s a blessing for us to be able to read her work while she’s here.” Many black women writers don’t become well recognized, or even have their work published, until after their deaths, which is an aspect of publishing that Keah is working to change.

Keah focuses on intersectional representation in the media because we’re all influenced by what we see, or don’t see, in movies, on television, and in books. “I think we deserve to be seen,” Keah says. “When I was growing up, I didn’t see any black disabled people.” Keah does see parts of herself in the characters Garrett from Superstore and JJ from Speechless, but her work is about continually elevating media representations so that disabled characters and characters of color have a variety of characters to connect to. She says, “It’s only fair that we critique that we aren’t given the representation that we deserve.”

Although much of her work focuses on disability and her identity as a black woman, Keah’s wary of being pigeon holed or boxed into a role where she’s not allowed to write about anything else. She writes book reviews, pop culture and entertainment news, fiction, and poetry that isn’t connected to her marginalized identities.

In Keah’s future, she hopes to continue to do this work in bigger ways. “I kind of want to do everything,” Keah says, admitting that she didn’t always want people to know about her ambitions because society is quick to tell disabled women of color what they can’t do.

Currently, she’s working on trying to become a guest on The Ellen DeGeneres Show. Keah fell in love with Ellen’s show when she was dealing with suicidal thoughts. “Before I became #DisabledAndCute, I would have an hour each day when I would feel joy, and it was because I was watching her show,” she says. “I just want to thank her. I didn’t want to live, and every time I watched her show, she was bringing people joy and making me laugh.” Keah also wants to write in different genres, write for a TV show, write a movie, and write a few books—and she recently became represented by literary agent Alex Slater at Trident Media Group.

“What I hope people take from my work is that disabled people of color live lives and our stories deserve to be told,” Keah says. “We don’t have enough at the end of the day. I want to be seen. A lot of my work started because I wasn’t seeing myself.”

One response to “Activist Spotlight: Keah Brown, Writer and Creator of #DisabledAndCute”