When I first asked Cyree Jarelle Johnson what their activism is focused on, they said, “I don’t know what it means to be an activist. I’m a writer and a speaker. I think of myself as an artist.”

Then they talked about how what we typically think of as activism—getting our physical bodies onto the streets in protests—is so largely inaccessible to the disability community.

I disagree with Cyree; I think they’re an activist and an artist, and that it’s possible (and maybe even preferable) to be both. Art can be political and make a statement, and activism isn’t only for people who are able to participate in something akin to the Capitol Crawl or marching in Washington, D.C. for Medicaid.

Art in itself is a form of activism, particularly when it’s created by marginalized people who are often ignored by traditional forms of protest.

Cyree’s work—which comes from their experience as a non-binary black person with an autism spectrum disorder—is a protest to anyone who believes that marginalized people don’t belong in the mainstream. They are a poetry editor for The Deaf Poets Society, managing editor at Transfaith, a member of the Harriet Tubman Collective, and a candidate for an MFA in poetry at Columbia University. Their work also raises awareness of Systemic Lupus Erythematosis, a condition that they have. “I don’t think people are talking about lupus correctly yet,” says Cyree, who hopes that more people will become invested if they know more about lupus.

What Cyree loves about writing is the freedom that the form offers. “Writing helps me say exactly what I mean, and then I can edit myself,” they say. “That’s how I fell into practice as a writer.” 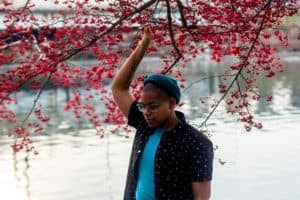 Right now, Cyree is working on three different narrative poetry manuscripts, and is trying to figure out how to talk about disability authentically in these stories. They don’t want to center their characters’ narratives around disabilities, because it’s not accurate to the disabled experience and our lives don’t always revolve around our disabilities.

Cyree had the opportunity to speak at the White House for the 2016 Forum on LGBTQ and Disability Issues, nicknamed LGBTQ Disability Day about systemic issues with healthcare and how disabled people of color are at a higher risk of violence. Although they may not identify as an activist, the work of activists deeply impacts Cyree. “More than anything, I think that Harriet Tubman’s is the work I feel most closely aligned with. It’s hard for Black people to admit that they’re disabled.”

As a whole, Cyree’s work is about storytelling—particularly the stories of people whose stories aren’t often told, and telling the stories about disabled people that we don’t often hear, like those at the intersections of black or trans identities and disability.

And their work is activism because it fights back against the idea that we need to be able to fully physically participate in non-disabled people’s idea of protest in order to create positive change, and because it challenges any form of activism that isn’t fully accessible for everyone to participate in. It’s a form of activism that the disability community will always need more of.