Erb’s palsy is an injury to a bundle of nerves in the shoulder. It typically happens during birth or motorcycle accidents and can leave a person’s arm and shoulder partially or totally paralyzed. Mine was a birth injury. That’s why my elbow is bent, my shoulder dislocated, my wrist tipped inward, and, in a few other ways, my arm is shaped and moves differently than most people’s. The injury is visible. People in shops and at parties ask me about it. It’s workable. I’m typing this one-handed.

But I don’t think I accomplished anything by telling you that.

I mean, I gave you the context for the rest of this article. But did I make things better for people who have Erb’s palsy? Did I challenge any prejudices about disabled people?

There’s a poster that parents of kids with Erb’s palsy tend to circulate during Limb Difference Awareness Month and Erb’s Palsy Awareness Month. It has a blue ribbon and blue silhouettes of straightened arms and hands with fingers splayed wide open. I can’t straighten my arm or splay my fingers open, so you’d think that’d be a poor design choice, until you saw the slogan. “Raise a hand for those who can’t! Erb’s palsy awareness.”

There’s a picture of me from my senior year of high school. My friend Helen and I used to ride the train between Worcester, MA, where we lived, and Boston, where we had a grant writing internship. For two years we’d take the train back and forth, along the way passing this little red, brick mill sitting on the water. We’d press our noses against the window and talk about going there with a picnic one day, exploring the building and waterfront. We always had somewhere else to be, so we never made it happen until one day the summer after my senior year. It was a small and imminently achievable outing, but we’d planned it for two years, an eternity to an 18-year old. It gave me this sense of closure and power and hope.

Before we headed home, Helen snapped that picture of me on the train track, legs wide, arms thrown joyfully upward, fingers wide open like jazz hands. My left arm comes to about the height of my shoulder, elbow bent, wrist rotated away from the camera, thumb curled into palm. It didn’t occur to me that I couldn’t raise my hand. It occurred to me that I was exuberant and that this body language showed it. 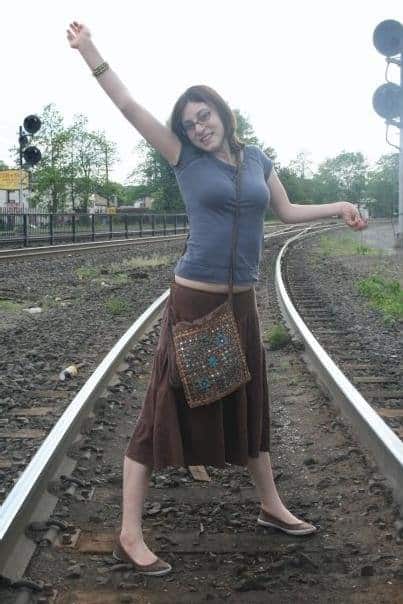 There’s another picture of me striking the same pose, this one from my first year in college, in front of a palm tree, thrilled to be living in the tropics. And another at the top of Mount Mohonk in New York, just graduated, at the top of a challenging hike. Arms raised. Back arched. Face lit up in an un-self-conscious smile. Carefree. Proud.

This is where the script dictates I tell you that in those moments, I wasn’t disabled. But I was. You can see in the pictures – this happy young woman’s left arm does not go all the way up. It’s small and crooked. But, like the right arm, it’s thrown as far up as the momentum of her happiness can take it within the physical limits that follow her everywhere, through triumph and grief and boredom and everything in between.

“Raise a hand for those who can’t. Erb’s palsy awareness.”

I’ve had conversations with other Erblings when I kvetched about strangers and acquaintances asking for my medical history. It annoys me to constantly repeat the same sterile explanation. My friends with the same disability but more patience insist they don’t mind, because each of these questions is an opportunity to raise awareness.

What do we achieve when we raise awareness? For some, it’s about preventing birth injuries. There are delivery techniques that obstetricians can learn to lower the likelihood of damage to the brachial plexus. Laudable, but a weird goal for me, personally, to work on – preventing more people like me from existing. And that’s part of the point. The poster wasn’t written from the perspective of someone with Erb’s palsy, nor does it address people with Erb’s palsy. It’s someone with two normal arms talking to other people with two normal arms. We, the Erblings, are the passive recipients of their advocacy: “Those who can’t.”

Don’t get me wrong. I’m deformed, not a monster – I want preventable injuries to be avoided. But, save for some of my lowest and most rare moments, I don’t want two normal arms. My body straddled the train track, marveled at the palm trees, and scrambled up Mount Mohonk – not some hypothetical other body, unadorned with surgical scars, incapable of a one-handed volleyball serve and one-handed typing at 80 words per minute.

What I want is for strangers in shops and at parties to notice or not notice that my body differs slightly from their imagined, average ideal – and then not demand an explanation. I don’t need everyone I meet to know the specifics of my injury. I want to move through the world without ever needing to justify my existence.

What I want may not be as catchy, or even as achievable, as the constant refrain of “raising awareness.” But when I think about the next generation of people with limb differences – and, even with a lot of success preventing birth injuries, there will be a next generation – it’s what I want for them, too.

Hannah is a freelance writer and digital communications professional whose interests include disability, labor rights, feminism, and education. She's an avid consumer of horror movies, brunch, and an irresponsible amount of secondhand clothing. She lives in Brooklyn with three friends, two of whom are cats.