Wendy Lu started working on reporting for what later became her New York Times feature “Dating With a Disability” while she was still enrolled as a graduate student in Columbia University’s journalism school. It was originally her master’s degree project and took six months to complete, as she developed the story with women around the country who have varying forms of muscular dystrophy.

The initial project was in photojournalism, and Wendy hopes to use her remaining over 40 photos and reporting to create an Instagram photo project. She’s also interested in potentially submitting the photos for publication or display in a photography showcase. If she has the chance, she’d love to do additional reporting to complement what she still has and, as she says, there are so many angles to the topic of dating with a disability.

“I absolutely think that newsrooms need to hire more people with disabilities, and cover disability across all beats,” says Wendy. “It doesn’t belong in just one section. There’s a disability angle within every story within every beat that you can think of.” 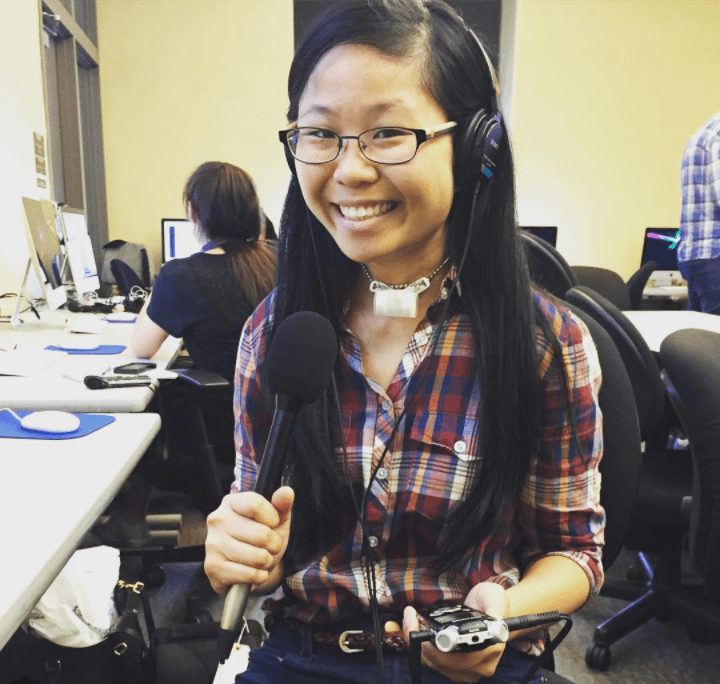 Currently, Wendy is working on a variety of projects. She’s the director of internal affairs at Monstering Magazine, a literary magazine for disabled women and non-binary people. She’s one of the panelists at the 2018 New England Newspaper & Press Association Convention, covering how journalists should report on the disability beat, which was inspired by her piece for Columbia Journalism Review about the same topic. She’s also working on a memoir about what it was like to grow up as a Chinese American disabled woman, which she plans to finish by her birthday in June. And, of course, she’s reporting—topics she’s working on include #MeToo, online dating, women’s wrestling, and politics.

In the future, Wendy would like to pursue reporting outside of the United States, ideally in China or Hong Kong. She’d also like to do journalism in a local U.S. newsroom in a geographic area that’s typically underreported. Her longer term goal is to work for a national publication as a senior disability/health reporter. “There aren’t a lot of media outlets that are recognizing disability as a real beat and only a couple handfuls of identity editors,” she explains. “I think the news industry still needs to catch up in terms of learning how to report on different communities.”

Wendy will sometimes bring up her disability with her sources, especially when she’s reporting on disability issues. As a reporter, she believes creating a sense of trust with sources is crucial. Sometimes her sources will notice her tracheostomy tube and ask about it. She has also faced stigma as a disabled journalist. On one occasion, while she was visiting a prominent newsroom with her graduate school classmates, a senior reporter looked at her and asked, “What happened to you?” when he noticed her trach tube. It was a disappointing and disorienting experience for Wendy, but in her words, experiences like this also remind her why the work she’s doing is so important. Her stories, like this one about the microaggressions people with disabilities face regularly, have the potential to change social attitudes about disability and educate non-disabled people about issues like ableist language.

“I’m somebody who has to deal with these systemic barriers and everyday ableism, and that really sucks, but it also reminds me why I have to keep doing the work that I do,” she says.

As a journalist who reports on disability issues, Wendy is also keenly aware of what it means to be a balanced, unbiased reporter. Even though she’s a disabled journalist, she recognizes that the disability community is not a monolith and she doesn’t speak for everybody. While talking to sources, she’s careful to ask unassuming questions, and she takes the time to be aware of her own biases (including ones she didn’t realize she had). And she always asks sources how they would like to be identified in a story, so it’s their choice what language represents them.

Since Wendy’s piece about dating with a disability came out in the Times, she has done more work in sex and relationships reporting. “In the past I’ve felt kind of shy about reporting on sex and relationships,” says Wendy, although she’s gotten significantly more comfortable and confident and describes it as her secondary beat. “It’s really fun. You learn so much about interpersonal dynamics and social interaction.”

To brainstorm ideas for pieces, Wendy explains that she’ll consume a piece of breaking news and ask herself: What’s missing here? Whose story isn’t being told? She recently tackled the breaking news about Wonder’s Oscar nomination in this exact way: After thinking about the issue, she pitched it to Bustle and spent the night drafting the piece. According to Wendy, “In this whirlwind of breaking news, every outlet is reporting the exact same thing when it happens. At the same time, I wish we could all take a step back and think, ‘What does this mean?’”

It took Wendy time to figure out what her disability means to her—and it’s something she’s still figuring out. Once she better understood her own identity and began writing about it, she realized this was something she wanted to keep doing.

“What am I doing if I’m not trying to change things?” Wendy says, and that question sums up her work as a thorough journalist who believes that she has “so much left to learn” and is committed to reporting the truth. “I’m trying to challenge the status quo and challenge narratives.”