Ariel Henley has always loved writing, but didn’t always know that she would use it to amplify issues that she cares about, whether the topic is sex education for the disability community or media representation of facial disfigurement.

Born with Crouzon syndrome, Ariel’s work often comes back to what it means to live with a facial difference in an ableist society that places so much emphasis on physical beauty. “The more pieces I had published, the more I heard from others like me, who had never had the opportunity to have their stories and their struggles highlighted in the media,” she says. “Now I know this is what I was meant to do.”

Ariel is currently pursuing her master’s degree in higher education and student affairs, and hopes to work at a college in admissions or as an academic advisor to help bring more diverse students into higher ed. She’s also working on her memoir.

Anyone who reads Ariel’s work leaves with a greater understanding of what life is like for people with facial differences, and it’s impossible not to feel a strong sense of empathy because her writing is authentic and powerful. (Her essay “White Noise,” published on The Rumpus, was a notable for 2016 Best American Essays.) She hopes that readers who are outside the facial difference community become more open to listening, and the importance of learning. 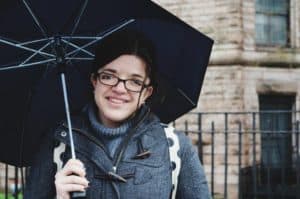 As an essay writer and memoirist, being vulnerable and honest is central to Ariel’s work. “I believe in the power of authenticity, so being able to really reveal my deepest truths is really empowering to me,” she says. “Sharing my stories is how I connect with the world and the people around me.”

Visibility also comes with that level of vulnerability, though, and as a public figure who writes openly about her experiences, Ariel is no stranger to online trolling and harassment. She regularly receives hate mail and vicious online comments, often attacking her appearance.

Her advice for other writers, activists, and public figures, particularly those who are marginalized? Don’t read the comment sections. Ignore the hate, and “Always speak your truth.”

As a freelance writer, Ariel has at times been boxed in by her facial difference. Editors and clients sometimes see her as “a writer with Crouzon syndrome,” rather than just a writer. She has also worked with ignorant and naive editors in the past who changed the integrity of her work to make it more sensationalist, but she’s learned to be more upfront with her editors. “If someone says something hurtful, I tell them. I almost always ask to see the final version of a piece before it runs,” she says.

Although she’s been pitching more to editors outside the disability lens, she’s also accepted that even if people see her as a writer with a facial difference first, what matters is that she’s able to reach readers. One disability activist wrote to her to say that Ariel’s work on facial equality had saved her life.

“There are no words to describe how it feels to know my words have helped someone,” Ariel says.

For Ariel, recognition has been an incredible feeling as an activist, not just because she’s proud of her work, but also because she knows it will make an impact. “Disfigurement has sort of been a separate category for a long time — one that’s received minimal attention, in my opinion,” she says. That’s something that Ariel is determined to continue working to change.